Listen in as the team behind the world premiere of Pete Rex—playwright Alexander V. Thompson, director Brad Raimondo, and performers Greg Carere, Simon Winheld, and Rosie Sowa—discuss the uses & dangers of fantasy, making your hometown a central character in your script, eerie resonance with the political moment, fun actor challenges, familiarity with the characters and situations onstage, loving someone while hating their inaction, crossing Ionesco with Albee, and, of course, dinosaurs.

“…this place that had been something, and turned into kind of a ‘non-place’ through the loss of industry, and the loss of jobs, and the economy. And we were all, ‘that feels like it should be in here now’…I think that’s something that we really want people to take away…the experience of these places…that have gone from thriving, to nowhere, and what that does to people…”

END_OF_DOCUMENT_TOKEN_TO_BE_REPLACED 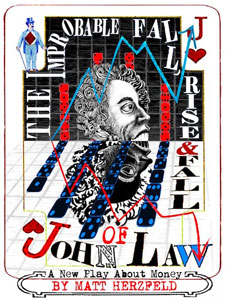 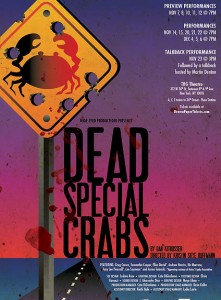 Maine to Florida is a long way to drive in a tan Toyota Corolla.

And who knows what kind of people you might run into along the way—like light-worshipping cultists, overly-emotional poets, highway-trotting serial killers, hunch-less detectives, Edgar Allen Poe impersonators…

All these strange characters (and more) come together in the gloriously weird and funny Dead Special Crabs, written by Dan Kitrosser and directed by Wide Eyed Productions‘ Artistic Director Kristin Skye Hoffmann, who joined me for an interview after a preview performance of the show.

Listen in as Kristin, along with actors Samantha Cooper (June) and Greg Carere (Virgil), discuss writing like jazz, crying in hysterical laughter through rehearsals, working with everyone’s comedic strengths, and why produce this crazy play at this crazy time in U.S. history.

“‘…it has a bit of sentiment, in a way that doesn’t make me want to barf, which I am always excited about…’