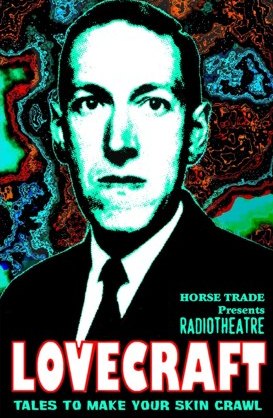 Horror in the theater has always been a tough thing to pull off. The Grand Guignol did it, and by many accounts spectacularly so for the time — but what about now, when Hostel & the Saw franchise has altered our perceptions to the point where we’re expecting more realistic depictions of violence, and the most outrageous interstellar creatures can be conjured up with the right software?

Well, as the master put it…

RadioTheatre Artistic Director Dan Bianchi knows this, and as a Lovecraft fan, he’s using it to great effect as he goes through and dramatizes — live, onstage — the Lovecraft cannon with RadioTheatre’s H. P. Lovecraft Festival at The Kraine Theatre.

Listen in as Dan and I discuss horror without a $200 million budget, why he does radio drama live, radio-erotica (seriously!), and the importance of good sound design.

Program B – THE LURKING FEAR, THE STATEMENT OF RANDOLPH CARTER , THE HORROR AT MARTINS BEACH, THE EVIL CLERGYMAN
MAY 4, 6, 20
(Thur-Sat 8pm, Sun 3pm)