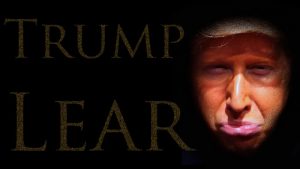 Listen in as the co-creators of Trump Lear, writer/performer David Carl & director Michole Biancosino, discuss their collaboration to put this piece together, playing Trump (and finding a way around the fact that Trump is inherently not funny), complicity, how to avoid preachy political theatre, tearing yourself down in your own piece, the importance of an excellent technician at the board, and the benefit of doing solo shows.

END_OF_DOCUMENT_TOKEN_TO_BE_REPLACED

If you’re curious to see (and hear) more, listen in to this episode of the podcast with Rise playwright Joseph Samuel Wright and composer David Carl as they discuss empire-level intrigue, big voices in small spaces, and rising vs. rising above. END_OF_DOCUMENT_TOKEN_TO_BE_REPLACED