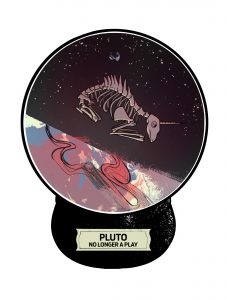 Listen in as the directors/writers of PLUTO (no longer a play), Jeremy Pickard and Lanxing Fu, discuss allegory, mass extinction, the definition of “eco-theatre,” community outreach, the benefits of imposed limitations, and how to work with the fact that “it’s a different world now.”

“…it is devastating, in a kind of strange, like, ‘oh, I lost something that I took for granted, that I really thought was there, and it’s kind of a simple thing that I didn’t really think about, but it matters somehow’…”

Superhero Clubhouse and The Brick present

PLUTO (no longer a play)