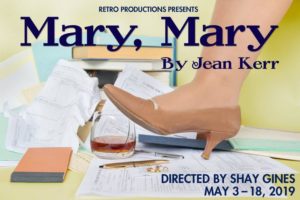 Listen in as Retro Productions Artistic Director Heather E. Cunningham, who plays the eponymous Mary of Mary, Mary, along with fellow performers Chris Harcum, Robert Franklin Neill, & Desmond Dutcher, and director Shay Gines, discuss digging into a zippy comedy, gender roles in retro shows, leaving naive nationalism, playing the outdated references, the complicated lenses through which we see plays from the past, transitions, “playing for keeps,” and why plays about relationships will never go away.

“…when I set out to choose a play, I narrowed it down: ‘mid-century, female playwright, comedy’…”
“…I was very drawn to this character. She’s the smartest person in the play…she has flaws, she’s insecure, she’s a beautiful, robust, witty woman. I felt like she was so full, and rich in character…”

END_OF_DOCUMENT_TOKEN_TO_BE_REPLACED 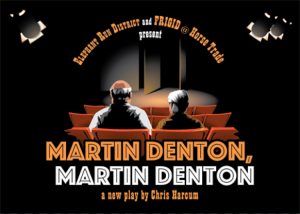 Listen in as the Elephant Run District team of Chris Harcum, playwright & performer, and Aimee Todoroff, director, of the company’s new show Martin Denton, Martin Denton, discuss finding safety and meaning in a community, “love,” the validity of our work, the ways in which our productions can live forever, how and why we do this thing called “indie theatre,” and more about this love letter to the scene.

“…what we’re doing is creating life, and then giving life back. And for me, one of the people who was there, and kind of charted what I was doing—and for whom I felt this very deep connection, and this person who, if he didn’t see my show, it felt like it did not happen—needed his story told.”

END_OF_DOCUMENT_TOKEN_TO_BE_REPLACED 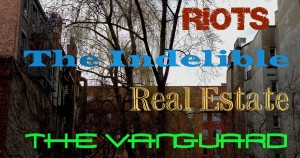 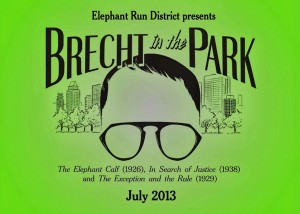 In case you’ve never listened to the podcast (or met me), I love Brecht’s work. And I love performances that are out in the open, and free to the public.

In my humble opinion, today’s guest, director Aimee Todoroff, is right—Brecht is indeed perfect for being done outside. Free & open to the public.

…and no purchased seats posing as “subscriber tickets,” taking seats away from the actual “public” (yes, I’m looking at you, oh-other-producer-of-plays-in-Central-Park).

For their first ever Brecht in the Park performance, Elephant Run District presents three of the master’s short plays—The Elephant Calf, In Search of Justice, and The Exception and the Rule—all of which have very strong connections to our current state of affairs.

Listen in as Aimee talks about her inspiration—text-wise & space-wise—for bringing Brecht to Central Park, what’s next for Elephant Run District, and how these plays written in Weimar-era Germany are eerily resonant with New York, NY, USA in 2013.

“How can we put the audience’s experience first, and make them have an experience that they’re going to talk about for the rest of the day?”

END_OF_DOCUMENT_TOKEN_TO_BE_REPLACED

A bit of a different podcast this time out: in this episode, GSAS! interviews artists from seven of the thirty — yes, 30 — plays that are part of this year’s FRIGID New York festival, presented by Horse Trade Theater Group.

It should be noted, FRIGID isn’t just another festival. The participants are chosen at random, so no silly politicking is involved; and, all participants keep 100% of the box office sales for their show. Try finding that kinda deal as a performer anywhere else in this town. Very cool format. Hats off to Horse Trade for making this happen every year since 2007.

Kicking off the marathon of mini-interviews is Erez Ziv, Executive Director of FRIGID and Managing Director of Horse Trade, followed by, in order: