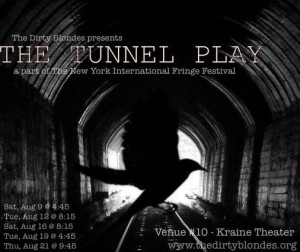 Welcome back to The Dirty Blondes, playwright Ashley Jacobson and producer Elizabeth Sarkady, and to Mr. Brett Epstein (his third appearance on the podcast)! They’re joined by fellow actors Ryan Guess and Dondrie Burnham (both of whom I hope will also become repeat-guests here on the podcast) to talk about their new show, currently playing in The Fringe.

Around a moveable set of three trunks, The Tunnel Play follows a young woman who gave up her comfortable life to live in the tunnels, her older friend (and tunnel-life mentor) who landed in the tunnels through hardship, and a self-loathing yuppie copywriter, as their lives set on a collision course just ahead of a massive weather event to hit New York City. What do you do when faced with the possibility that everything could be washed away at any moment?

Listen in as Ashley, Ryan, Dondrie, Brett, and Elizabeth discuss that scary, difficult question, as well as having to answer to someone, taking inspiration from Superstorm Sandy, and the things we bottle up (until the lid blows off).

END_OF_DOCUMENT_TOKEN_TO_BE_REPLACED

What do you get when you put a playwright/director, an actress/singer, a comedian/actor, and a podcaster around a chess table in Washington Square Park late on a Sunday night?

This episode of Go See a Show!, obviously.

Listen in as I speak with Brett Epstein, Brittany Taylor Visser, and Sean Kleier about Brett’s new show, inspired by 30 interviews with friends, acquaintances, and random strangers. It’s called Based On Your True Story, it’ll premiere this week at The Tank, and you can get a sneak peek here on the podcast: tales of klonopin, awkward interviews, arrests in 3D, $7 sandwiches, interrupted interviews, and Sean not playing Hawkeye await. 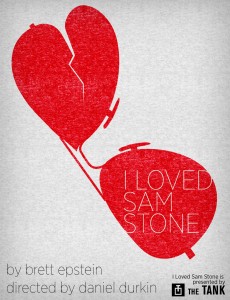 On today’s episode of Go See a Show!, an interview with playwright Brett Epstein, author of I Loved Sam Stone; Brett is currently playing the role of “Ben” in the run of his award-winning show at The Tank.

And below, take a look at their YouTube trailer!