For adapter/director Cristina Lundy, the analogues between Shakespeare’s tragedy set amidst the jealousies of military officers, and the contemporary world of police work—especially in “stop & frisk”-era NYC, where those who are trusted to protect, can be the ones most feared—made this production all the more urgent to present.

While the production has closed from the posting of this episode, I’d highly recommend a listen to this interview, because NY Shakespeare Exchange has got some really interesting stuff going on—like The Sonnet Project, featuring video adaptations of all 154 sonnets, and the upcoming ShakesBEER, which…well, listen to the episode for Christina to explain it. It sounds amazing, and it’s coming up very soon…

Listen in as Cristina and I discuss hidden off-off-Broadway gems, drinking with the Bard, and how Shakespeare can be for everyone.

“The people we most want, in a way, are the people who don’t think they like Shakespeare, and let us convince them otherwise…”

Next up from New York Shakespeare Exchange: ShakesBEER! 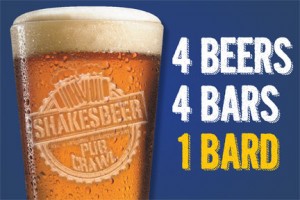